Still having computer problems. This has allowed me to "look" over my posts. I noticed a few drafts that I never finished. This one is very interesting. It goes back to June 2015. You can read some of my observations and feelings about the market and economy at that time. To recall, it was a period of super low interest rates and the Fed using QE buying. Take note to the chart on copper. The commodity has risen to the present 3.20 level and it is now in an uptrend from the downtrend back in 2015. That being said, the Baltic Shipping Index is turning down and it has never recovered or sustained an uptrend. This leads one to say that we are now in a period of consolidation.


D.R. Horton(DHI)who sells more homes than any other homebuilder posted earnings for the second-quarter. They sold 22% more houses compared to the same period last year and they made 7% more for similar models. The stock is up 17% for the year. It is even higher now.
Their competition, Lennar(LEN) is also doing well.
Housing Recovery
USG Corporation(USG)thinks so. The largest drywall distributer had huge profits. USG's stock is up 10% this year. It too is even higher.
Another company gaining on home sales is cabinet maker, American Woodmark(AMWD). It's stock has surged 62%. Wow!
All of the above point to the housing recovery except for one little, no, make that a big thorn. According to the Census Bureau, the homeownership percentages has declined to 63.4% from the peak in 2004 of 69.2%. It has fallen every year from the peak and is testing its lows from way back in 1965 when LBJ instituted the "Great Society." This story has not changed. Housing is unaffordable and rents are insufferable!
This is a Conundrum.
Home ownership is at 50 year lows while builders and suppliers are doing well in 2015. Prices in 2018 continue to rise. Why or how can this be?
We know...
that house flippers changed their approach from straight demand to buying distressed properties, repairing them and then, reselling. This is a new segment in our economy.
We also know that large hedge funds entered the fray to capitalize on low, distressed properties and then, renting them. Rents have risen every year from the financial crisis in 2008. Blackstone Group(BX)has purchased over 50K units since 2012 and they were buying selectively even before that time.
We also know that the average medium home price is rising in all parts of the country. Real estate varies by location, however in the Northeast it is over $240K. In the Midwest it is over $163K. In the South it is over $188K and in the West it is beyond $305K. The average new home costs well over $328K. This is a new all-time high. Together, this spells trouble. Why, you ask? Because this is the same type of price action that led to the financial crisis in 2008. Prices are too high in relation to wages which remain stagnant and new revelations are pointing to dark clouds approaching. This cloud is still out there and prices are even higher as we roll into 2018.
Flippers
are losing money on low-end properties and more and more are turning to million dollar investments. This segment has no financing problems, but buyers are demanding and most importantly, are a small percentage of customers. If you can't sell, the flipper has to make a large payment and he has limited resources. Big future problem.
Blackstone is slowly thinning its portfolio because they realize that baby boomers are retiring and downsizing which means more properties on the market. At present, it has been a seller's market, but the ratio is changing, rapidly.
If you like a second opinion, I have Dr. Copper here. Look what his chart is saying along with Mr. Lumber. 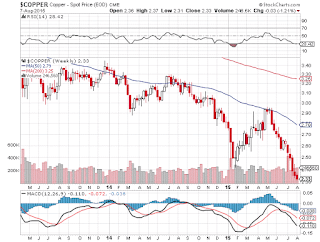 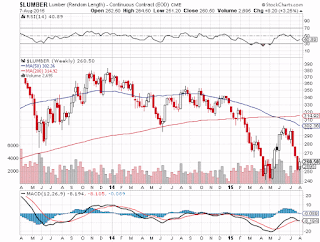 This shows that there is really no demand. The homebuilders are following the example of the airlines who cut flights to fill seats with limited flights scheduled. Homebuilders are barely adding a million units a year and most of that number is skewered toward multi-family which is rental. Back in 2005 and the years prior to that year, builders put up over 5-million units per year. This truth is never discussed in today's media or by economists.
Bottom line: If there are no buyers in the store, you make no sales. You can do tricks like discounts, offering freebees, etc., but declining revenues foretell lean times and if the deflationary attitude sinks
into the conscious of buyers, they will wait for lower prices before they purchase. Warning clouds are forming. Conundrum solved. I was way off in my summation, however the present market faces higher rates and sales will shrink due to interest rates. Builders may take the bite for a period, but not for long. Housing is the most important segment in our economy and the clouds are getting darker. If one were to reread this piece one year from today, the landscape will look very different.
Posted by JFLSebastian at 10:25 AM No comments:

The economy is so bad that Motel 6 won't leave the light on for you.
There was another Republican debate on CNN on Monday night. The winner? ESPN with Monday Night Football.
Our old friend Sarah Palin took a vacation to Isreal. I guess she figured she could solve the 2,000 year old conflict while sight-seeing. Anyway, she fell short of money and needed to make a bank withdrawal. She was last seen asking fellow tourists if they knew the location of the West Bank.

There is a lot of concern over oil prices. The problem with the shortage of oil is because no one checked the oil. There is a geography disconnect. We have oil in Alaska, Texas, Oklahoma, Louisiana and now, in the Dakota's, but the DIP STICKS are in Washington, D. C.

This actually happened to me at work last Saturday night. I lost my housekeys. I get home at 4:00 AM and I'm locked out. Bad, but not as bad as my friend who lost his girlfriend's keys. She said,"no nu-key for you."

President Obama recently spoke about the Japanese nuclear accident,"the U.S. is in no danger from radiation," as he boarded a plane heading for South America.

President Obama had a luncheon with the leading Republicans the other day. As it turned out he did not receive any salt, pepper or butter. No, not due to dietary concerns. It is because the Republicans won't pass anything.

A man was standing on his porch as flood waters approached his home. Later, as the water rose a passing boat offered to lift him to dry land. He said,"Thanks, but no thanks. God will save me." Later, he was seen by a passing helicopter standing on hid roof as the waters continued to rise. The pilot shouted to him, "I'll drop you a rope and fly you out." He replied, "Thanks, but no thanks. God will save me." After he drowned, he was heard to be arguing with St.Peter at the Gates to Heaven. "How could God not reward my faith by saving me" he asked? Peter replied, "He sent you a boat and later, a helicopter." MORAL: Sometimes the truth is hidden because it is camouflaged by reality.

People ask me what is the safest bank to store their assets and I only can tell them the worst bank which is called the "Snowbank." It is bad because they freeze your assets. As you know the nation has suffered some severe weather and blizzard conditions in many states.

One of the coldest places has been Washington, D.C. It was so cold there that politicians were seen with their hands...in their own pocket.

A mother and her little daughter were seated at a restaurant as the waitor returned her change from the bill. The girl played with the money and accidentally swallowed a nickel. The mother screamed,"somebody help me, my baby is choking on a nickel! Somebody, please!" At a nearby table a man got up and performed the heimlich maneuver with the coin popping out. Relieved, the mother followed the man back to his table. "Thank you. You must be a doctor?" "No" the man replied, "I work for the IRS."